A downloadable Experience for Windows and Linux

Took me several tries to figure out the controls - that there are only two interactions, build and force reload. At first I thought arrows pointing up meant upgrade.

I couldn't place and load towers quickly enough when enemies appeared to kill them, so best strategy still remained building at the center of the map. Also quick reloading towers near center allowed me to never run out of bullets in them, however that being a little bit tedious.Towers could also be better at indicating if they're going to consume resource or if it going to pass though.

Thanks for the feedback!
If i have time before close of the jam. i'll change the icon to a power down icon while its charging again. and having the power grid glow where power is running is on my todo list.
The aim of the game is to be about power grid simulation and also building the power grid. this is an alpha alpha of the game to show the turret mechanics which i want to nail before adding the more complete parts of the game.
Current TODO:
Better reload feedback
better power grid representation
rework the magazine UI
replace central 4 tiles with an engine/cockpit for the MC
~~~~~then~~~~~
Building the grid by drawing from a deck of tiles.
Wave direction indicator.
selling/upgrading towers.
additional enemy types (big slow, tiny fast)
additional tower types (10 planned) 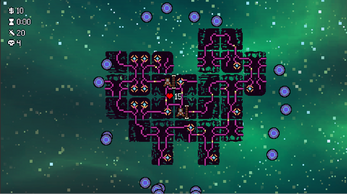 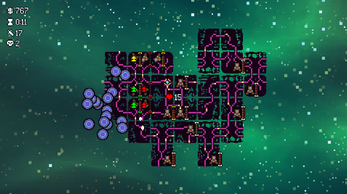 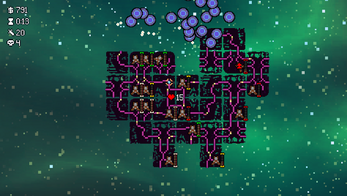